skip to contentskip to navigation 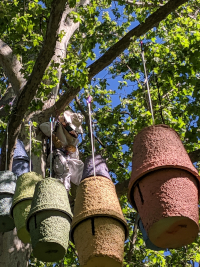 100 Hives Davis is a utilitarian artwork and public service focused on the management of honeybee swarms in city space. In 2019, 77 swarm capture hives toured the city with installations at Central Park and the Davis Food Co-op. parks and backyards across Davis. Read more about 100 Hives Davis.

100 Hives Davis of the creation and colorization of 77 swarm capture hives (pictured), followed by a number of installations of all the hives at once to create public spectacle, and culminating in their distribution to backyards and parks across the city. The artwork stands today as a community-supported, city-wide swarm capture network, preventing gentle, natural city honey bee swarms from landing in inconvenient places and infesting walls and chimneys, which result in nuisance to humans and often extermination to bees.

In our hometown we recently completed "100 Hives Davis", a living ecological art spectacle that lived for three days in Central Park in the heart of downtown. The work, involving 77 rainbow colored swarm capture hives, caught 7 swarms and was seen by hundreds of people at the Davis Farmer's Market.

After a turn as a major downtown art display, the swarm capture hives found homes in city trees and private backyards where they persist as a city-wide network of swarm capture hives. These utiliatian art pieces collectively provide a public service, preventing natural, gentle swarms of honey bees from infesting walls and chimneys in homes and businesses. They are also a platform for continues art making.

Many thanks to City of Davis office of Art and Cultural Affairs, the Black Rock Arts Foundation, and Davis Ace Hardware for generous grants for 100 Hives project.